Still very much a work in progress. I wanted to make a box for my bones/ashes I wanted to show a little bit of who I am and what I'm going through at the moment. I'm crippled at times by bipolar and had it in mind to take my own life again. I changed my mind as I was making the damned thing as well as it's pointless taking your own life if you believe in reincarnation, which I do and although another shot at another life might seem like a great plan it's going to be another 18 years until I'd be marginally useful.

I have bipolar which is great most of the time It's like being on free amphetamines. I got through a massive chunk of life not knowing I had it, I learnt to deal with myself through meditation and reading. I don't get angry often I think people assume having bipolar means your a rage machine waiting to go crazy. I do from time to time get angry and I'm pretty good at focusing that into ideas. This work is something born out of anger for example, I think there was quite a bit of frustration also. I get crazy ideas or ideas that might seem out of the ordinary like trying to build a giant blue whale out of all the plastic in the world, I didn't realize the scale of the problem and really we probably would need a plastic whale in every country to get rid of that much plastic. I think it's okay to think big, it's a big problem.

Bipolar is hard when people are nasty, gossiping or I'm putting pressures on myself, my thoughts start to race and woo my own voice calls me horrible things and worse. I don't take the medication for bipolar and I never will I love my crazy brain. I have tried what's on offer and It's awful stuff, some people might get on with prescribed medication but it's not for me. I felt my soul disappear on prescription meds, not having a creative thought or feeling is a pointless existence. I've caused myself a lot of trouble over the years making rash decisions.. I have gotten better but I do like to make a shit choice every now and then, I'm always hiding and avoiding someone or something and I wish I wasn't like that, sometimes I'm super confident and want to socialize but it's not as often as I would like.

I took much inspiration from Grant Morrisons "The Invisibles" I'm still to read the last ten or so pages, when you know what reality is do you need to keep falling down Alice's rabbit hole. The plot plays out where Grant himself plays the part of King Mob accompanied by a team of misfits they fight an invisible war against the "Archons of the outta church" who want to control humans. My favorite character is Lord Fanny a Brazilian transgender shaman who is beautiful I love everything about her. If I could be any superhero I'd be Lord Fanny. You see the Invisible fictional world is not much different to our world in my mind, I don't want to ruin lives or make mine difficult but I need to explain a little of my past hear. I was physically and mentally abused as a teenager and the effects of this trauma has had a big impact on my life. I related to of all the hero's in some way or wanted to be them. I listened to The Smashing Pumpkins, Pixies, Nirvana and Placebo mostly on the first two. Rage Against the Machine and Pendulum on the center piece.

Magic mushrooms are not to be messed around with hear in the UK there is another species that is not similar really, but people make mistakes and it could kill you so be responsible my advice is to not pick mushrooms unless you know what they are. I have used them more than once to find deeper meaning from life with success. I've had the most profound experiences using Mushrooms and even if the trip was bad I learned something about myself. I don't think I've ever learned a thing from drinking alcohol other than I'm not a drinker but it did play a big part in my life over the years and it's effect can be devastating, it makes my head go a bit funny haha I know that's intended but as I've gotten older it just feels like it's hurting my whole body, sounds weird but that's how it makes me feel past two drinks. I will once again issue caution Magic mushrooms are illegal hear in the UK and the bad trips can be very scary and damaging to a mind potentially.

The mushrooms like everything else are symbolic and if you read "The Invisibles" you would know why I used them in this context, this is a portrait of us. It's all about our world and the masks we are wearing. The mushrooms in the novel are like the sunglasses in "They Live" an 80's science fiction horror film by John Carpenter the sunglasses in the movie reveal a world ruled over by an alien few, the mushrooms in Grants novel act much the same way. I'm using them in my work as symbol of the unseen.

I saw something today about Jackson Pollock working with stone at the beginning and later again towards the end of his life and that got me thinking about parts of my education that have been of huge benefit. "There is something in the dust"
I did my masonry apprenticeship at Moulton College under Craig Murphy, Daren Tailby, Richard Hoyle and John Starkey, It was one of if not the best courses in the UK at the time. I recommend anyone to try their hand at working stone, the skills/methods are transferable. I think Pollock was right to carve and ignore his studies, I couldn't believe I did the same thing as him when I went on to Art school after my first year though the dust became a problem, then grinders became a problem. So I moved home to work in my space where I could produce work and learn in a material I still hadn't finished with, then being antisocial became a problem, admittedly when that heart beat tap tap tap is thrumming it's quite antisocial I suppose, I failed with all my work and I couldn't even find stuff on the website so that's likely my fault for not paying attention to a crucial lecture in the first year, I did attended a fantastic course at Hereford Collage of Arts where I picked up third place Brian Hatton award in 2001 Jacob Rock was my tutor and a big inspiration. All these people, places, objects and experiences are the tendrils that make up a portrait as I understand myself. I heard it put that there are thousands of versions of ourselves out in the world, yet only you know the real you. We all have different versions of each other in our minds we all  carry a small parts of each other and although it might not always be a truth or something we like, it is interesting to know that we don't end at our fingertips and toes.

As I've been making the box's it's transformed from a really desperate moment, into something fragile, soft, warm and fierce. It's alive I gave birth to this crazy object, I look at it for hours thinking about the story rapping around it. I think we get confused as to what beautiful really is and to me it's a feeling more than it is visual, I wanted it to be beautiful and I hope it is to some people.

It's about living and dying and at the beginning it was very much about myself, I got the first side nearly half finished and it was so crystal clear what I was outputting, I felt incredibly guilty for feeling selfish enough to kill myself, I started then drawing the rat panel. I've gotten so ingrained into these projects of the living and dying I am hurting. Sometimes I don't know how to stop hurting myself I have to put the rat into the machine because I want to help people. You can reach out to people you think should help and they don't give a shit really, but your friends the people you choose to love are always about.

A friend of mine walked into a lamp post whilst telling me to not take life so serious, it was so funny and it was perfect timing I miss that friend terribly. I new there was going to be a central component and made the figure early on. I got depressed again and stopped working. I felt imprisoned by myself and couldn't even open emails, which sounds ridiculous I know but it's a thing! I hadn't felt so low for many many years, I got angry popped a little bit and wrote an angry statement put in on FB because when you get angry and need to stick it to the man you go to FB to be angry with your friends why!? My friends from all random places in the world thousands of miles between us helped me through, even though I'm bipolar and can be a pain in the arse my friends cared enough to be there. I still haven't drawn the center and it's nearly finished, sometimes having a plan is not the way to work.

It's still being made and I will update hear more about the center later. Please follower on Instagram to see progress photos. 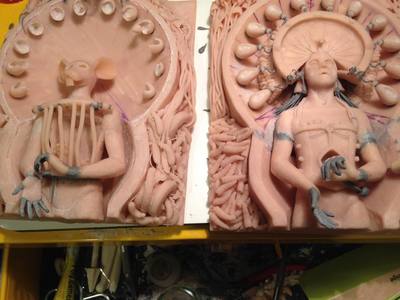 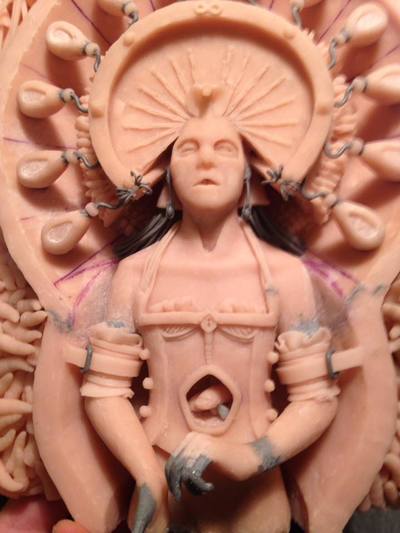 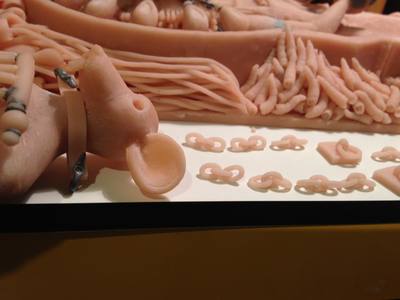 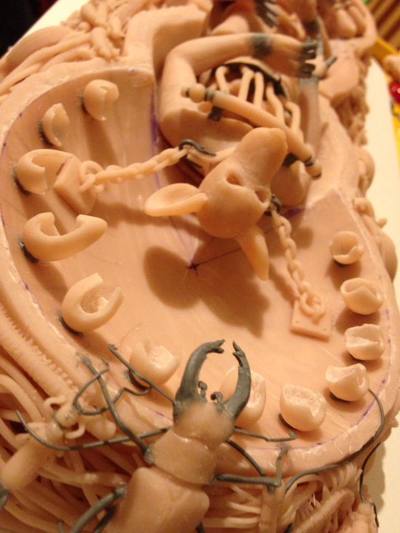 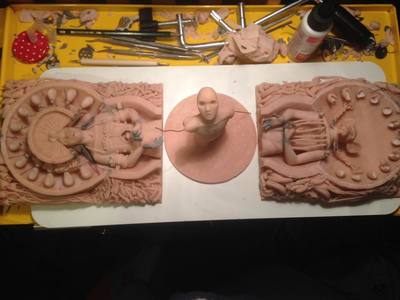